My current workspace at the back of the garage seemed like luxury at the time. Rather than just squeezing everything onto a small piece of kitchen counter next to a sink, I made a custom L-shaped workbench that was built like a tank. It had shelves below, some above and plenty of power points. Unfortunately I soon filled the space with a laser cutter that was bigger than I expected. Then the old space beside the sink became occupied with a lathe. It’s true that stuff grows to fit the space you have.

Since we moved into our house 7 years ago, there has been a bit of ground at the bottom of the garden under the shade of some old plum trees. Only brambles grew there along with builders’ rubble and a small shed. It was fenced off and more or less abandoned. The time eventually came to do something about it. The full space was 9m x 4.5m. Trees and a fence were removed. Earth was shifted and the ground was flattened – very hard work. About two thirds of this space was about to become a new workshop, with the remaining third for the kids to have a swing, slide or something.

I shopped around for a while. Dunster House looked OK, but had enough bad reviews online that they were discounted. Then I found The Garden Office. A bit more expensive but much better. They’re a really great company who I can highly recommend. I went for a building with internal dimensions of 5.5m x 3.8m – about the largest I could go and still leave a reasonable space for the kids. I was very impressed when visiting their showroom. Unfortunately they’re now so popular they had a 3-4 month lead time. 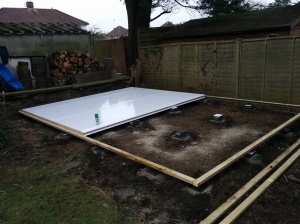 Workshop base in progress

Eventually, one Friday the sent out a team to lay out the base – some very helpful guys who got it as close a they could to the boundary to maximise space. Rather than the more usual laying of a concrete base, they drill about 20 holes and poured concrete down to form pillars for the structure to rest on. Far less hassle than a full base and it seems to work really well. Each pillar has some adjustment to get it perfectly level 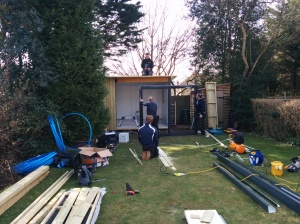 Then on the Monday to Wednesday of the next week the rest of the build went ahead. Once again, a really great team who seemed genuinely keen on providing what I wanted rather than just getting the job done. I knew I wanted lost of power points but I had no idea where. They were happy to run extra cabling where I thought I might want them and to leave some panels loose for me to get in there and wire it all up. They also left the flooring unfitted at my request so I could fit a thicker plywood base and a custom vinyl floor.

The only minor glitch came with the laying of the armoured power cable to my new workshop. Rather than waiting for an electrician to sign it off, the build team buried the cable themselves (along with some CAT6 and water pipe). There was a bit of hand dug trench they didn’t back fill, and the depth of the cable here didn’t look right. I dug a few test holes and found it hadn’t been bured to a safe depth – despite the trench being dug deep enough. Maybe they didn’t think anyone would be picky enough to dig and check! Anyway, it was remedied quickly and without any quibbling by the Garden Office team. I always say you can tell more about a company by how they handle the odd mistake then if they make no mistakes at all. Once again they did well. If you’re after any sort of garden building I have no hesitation recommending The Garden Office or their sister company Green Retreats.

Well, my lovely new garden building is up. Now it’s down to me to sort out the inside and turn it into a workshop…