So, after the initial teardown, it’s time to start the Philips Hue hacking. To be honest this is fairly simple so doesn’t really qualify as a hack. I said I’d start small and work up from there, so consider this a warm-up exercise.

I’ve got a motion sensing 10W LED floodlight mounted on my workshop. It’s supposed to light my way as I head out there but it doesn’t really work as I’d like. As I’m walking straight towards it the PIR only triggers when I’ve already trudged through the dark garden and I’m about a metre away. Also, the local foxes are constantly triggering it at night. Having this under Hue control would be ideal. Let’s take a look.

My Wicked brand floodlight contains a single chip LED which actually had 9 separate LEDs on the die. It has a constant current LED driver which outputs 350mA at about 24V. Hmmm – this could be very easy. They pretty much matches the Hue bulb I tore down. Electrically this might be as easy as connecting the spotlight’s LED in place of the Hue’s board. And you know what – it was! I did a quick check that the hue bulb circuitry was happy to dive the LED in the floodlight directly and then it was just a case of putting it all together. Out came the PIR sensor. Out came the constant current LED driver (the white box) and in went the Hue circuit board. 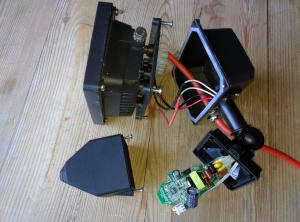 The only tricky bit was deciding where to put the PCB. Once the LED driver had gone, there was plenty of room behind the light. However, this was a metal case and the light is a fair distance away from the house. I didn’t think the Zigbee signal would reach. It didn’t have to be in the lamp at all of course, but it seemed neater.

I decided that the best place to put it was where the PIR has been. All it needed was a new 3D printed front cover. I could have saved space and printed a new back piece. I could have missed out the hinged bit and printed a two part case. My new Year’s resolution is to get project finished so I went with the simplest option.

So, here it is side by side with an original. Fitting was pretty easy. The only gotcha I has was that as i connected it, the Hue hub decided it would be a good time to update the firmware in the bulb. Hue bulbs normally switch on when first powered but whilst updating it was off. Cue some unnecessary checking of wiring, removing and remounting it, checking fuses, etc. Oh well, it working