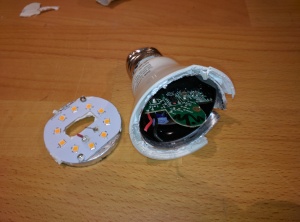 OK, so I said I’d start simple but this is about as simple as it gets. I’m almost embarrassed it’s not a little more complicated. I’ve done a teardown of a LBW010 bayonet fitting bulb and thought I’d take a look at its E27 screw-in cousin. (I’ll post this teardown later, but here’s a photo to give you the gist of it.) You can see the main board in the centre and the LED board that I’ve removed. It was similar to the B22 but quite different too.

Coming in from the left in the main photo below are the Hue mains connections – blue neutral and red live. My apologies about the mixed colour schemes but those were the wires I had to hand. Heading out on the right are the positive (red) and negative (black) that normally run to the LED PCB. All I’ve done is connect these directly to the input of a solid state relay. That’s it. 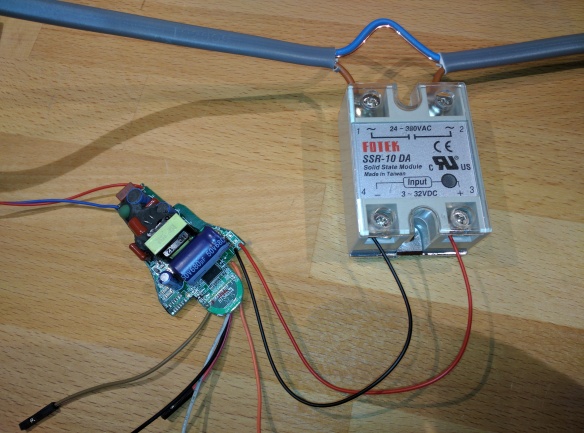 So why is this hack a little blunt? Well the four wires you see that aren’t connected are my far more sophisticated attempt to dig out some useful logic signal from test point on the PCB. There’s some nice stuff there. I thought I’d use a PWM output I found on TP5 to drive the SSR. It was almost enough but I hit a small snag. (Currently it works as expected between 1 and 100% but irritatingly switched the SSR on when at 0%.) I thought about leading these to a logic circuit, maybe even another microcontroller.

Then I saw the 3-32V input on the SSR. 32V?? That’s a little bit more that the Hue puts out the the LEDs. Could I? Yes, I could. The Hue outputs are used to driving 260mA at about 31V so with minimal load it actually reached about 37V, but it seemed to work fine. I’m using a constant current driver to drive a low impedance and just getting lucky that the voltage limit is being hit. I know that’s not sensible.

So basically , rip the bulb apart, connect it to a SSR and you can now drive any mains lighting you like! It should work with the B22 and maybe even the GU10 bulbs too, but these single colour bulbs are the cheapest.

Things can certainly be done a little better and it will be. For instance:

Anyway, all this will come but I thought this simple hack was worth sharing as-is.

UPDATE: A better way to get to a decent signal to control anything (using a B22 bulb) here.